Three years ago at this time, I was newly moved to Nashville, desperately poor, and in training for a brand new job at a restaurant. At my first shift, they explained to me that they had everyone create their own name tags to wear– a small move towards personalization in the machine that is corporate food service.

Most employees made theirs in the cafe with the three or four dim marker colors available, but I took my badge home, where I had a treasure trove of dozens of sharpies. I meticulously created a nametag I felt represented me, down to carefully drawing out music notes based on the melody to one of my favorite songs. It was a move that would characterize how I wanted to approach what was, for me, a temporary job that I never really wanted to have: I wanted to operate with excellence, with love, with humility, with honesty, even in places society deemed as unworthy of any of those things. 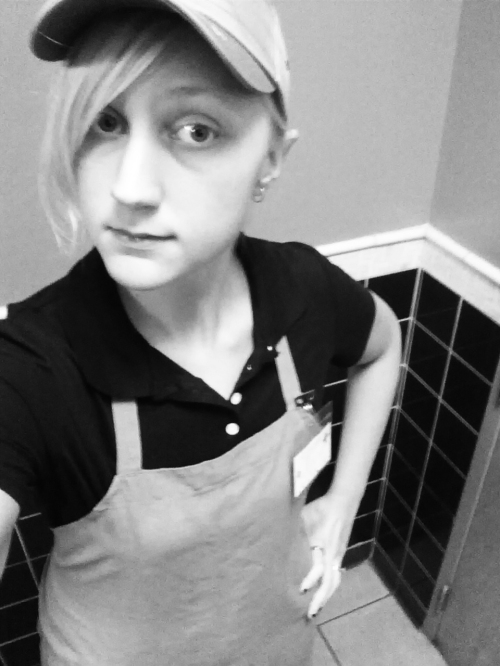 For the next nine months, I would fight through 3:40 a.m. wake up calls, exhaustingly long shifts that ignored legal requirements for breaks, frustrating decisions by management, callous and cruel behavior from customers, constantly feeling sick from working with food I’m allergic to, and the general societal perception that to be in my position I must be less than human– in short, all of the things millions of souls employed in service and retail positions have to endure every day. In all of it, no matter how dehumanized I felt, I’d pin on my name tag and with it my determination: to be kind in all things. To learn every single thing I could about being human. To treat everyone, from my coworkers to my customers, with dignity and respect (even if they were yelling in my face).

I did not always do this well, and I want that to be clear. It was a hard, hard time of life for me. That first winter in Nashville was, fittingly, one of the coldest on record. I can remember frigid, dark mornings, one after another, my minivan sliding across a parking lot turned to cold glass, my hands in agony from prying sheets of ice off the windshield. A lot of those mornings, I cried. I was as numb and shell-shocked inside as my locked and stiff fingers were outside.

But I kept showing up. When it felt impossible, when my heart felt buried beneath the gritty floor, I’d spend time silently praying for every customer who walked in– sometimes hundreds of them in a day. And as the months went on, I began to see customer after customer start smiling as soon as they saw me. Some of them told me their stories. Some of them brought me gifts. Some of them bought me lunch. All of them taught me more than I could possibly express about what it is to look each other in the eyes and recognize and value the humanity in someone, even if you’re from totally different walks of life. I wrote a little about it here.

This whole time, I was volunteering for the website I’d been writing for since college, never once assuming that could lead to a viable job any time soon. Until suddenly it did, and the chance was offered to trade cold mornings and bagels for a job that married most of my creative passions.

I went into the Christian music industry knowing that it would not be easy, that it would bring its own set of challenges and heartaches. If I had known exactly how many of these things I would face, I wonder sometimes if I would have chosen the bagels (it’s far less costly to be hurt by a job you don’t care about than to be hurt by a job that means something to you). I’ve sacrificed things I didn’t even realize I had to lose. And it came with a change so sudden it made my spirit dizzy: in the span of weeks, I went from having a job that made me widely deemed by society as less valuable, to having a job that many would deem as desirable, glamorous, even “cool.”

This has been a difficult transition in ways I don’t even know how to adequately express. I constantly feel like the world is offering me thrones, offering me crowns, throwing the door wide open to me claiming a certain kind of status. And yet I have learned through a lot of heartache that to accept any of those positions would require me to become something I am not, to sever myself from my own name. My goal cannot be to achieve status, to be the cool kid, to climb the ladder, to claim the crown of societally defined success. My goal, if I am to remain myself, has to be the same thing it was when I worked food service: to show up with excellence, humility, honesty, and grace.

And so very early on I made a decision: I would carry that old restaurant name tag with me on every single work outing. Every red carpet, every interview, every label office, every coffee shop meeting, every video shoot and press conference and album release party– the name tag comes with me, tucked into the front pocket of my bag. And when I am standing in a situation that feels hopelessly out of my league, surrounded by expectations and entertainment industry head games and the terrible temptation to become someone different just to survive, I pull out the battered, plastic-encased piece of paper. I clutch it tight and remember like a mantra: be kind. Be honest. Be brave. 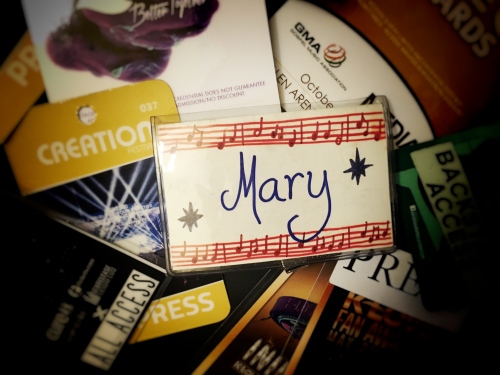 Because here’s the thing that both of these jobs have taught me: we are all equally human, equally valuable, equally full of fire and dignity and passion and soul. And the job we have doesn’t matter anywhere near as much as who we are in the process. There is this beautiful thing that happens when we show up at work, whatever that work might be, and choose to be who we are: we give others around us permission to do the same thing. We may not be able to erase a toxic work environment. But we can certainly stand as shining, living proof that a different way is possible.

Whatever job you’re in, wherever this finds you: I hope you know that it’s still beautiful every single time you clock in with your soul showing. I hope you know you’re not the only one who finds it hard. And I hope you know that although this might not always be the case, sometimes– often when you least expect it– your honest soul on fire will change your corner of the world. 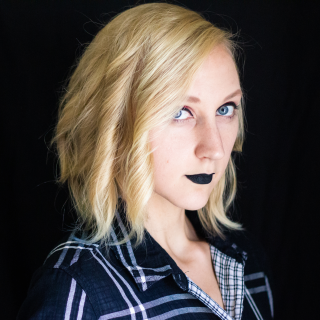 I have a deep and abiding love for writing, photography, videography, and rock and roll, all of which led to spending four years as Associate Editor for NewReleaseToday.com, the largest Christian music website online. Now I'm serving as a freelance writer and photographer, still passionate about music that makes us think deeper and love more.